IND vs SA: The Story of the Friendship Series 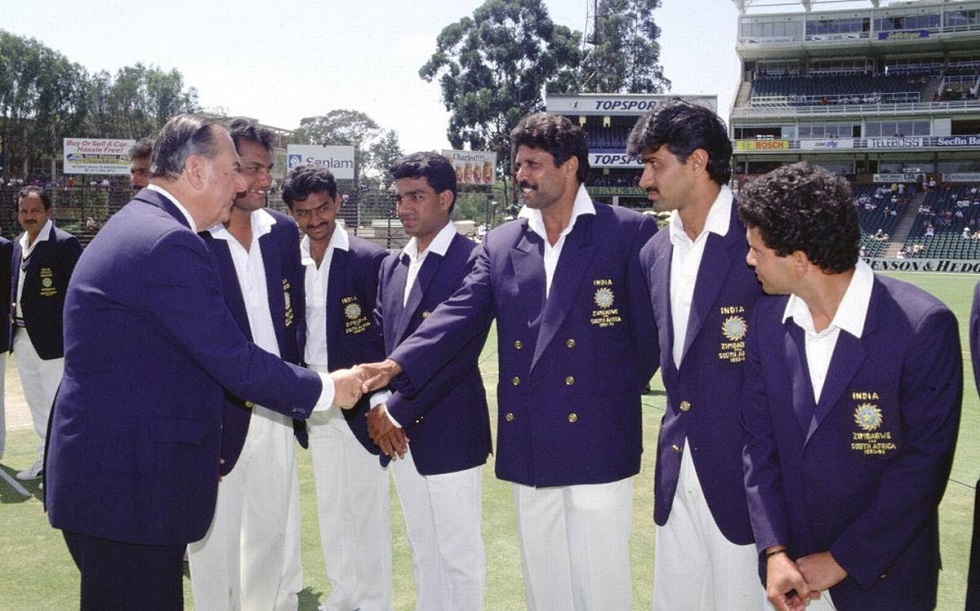 The South African cricket team is a powerhouse today, and has been for some time. Aside from the “choking” in World Cups, they have consistently been one of the strongest cricket teams in the world. However, between 1970 and 1992, no international cricket team toured South Africa. The reason behind that was the discriminatory “apartheid” policies of the South African government. The Indian passport wasn’t even valid in South Africa during that time. However, in the early 90s, the apartheid was finally lifted the Indian cricket team was the first non white cricket team to tour the country. The landmark cricket series was named The Friendship Series and it featured four Test matches and seven One Day International (ODI) matches. The result of this series was not that important. The important part was a celebration of the end of apartheid in South Africa and a return of the cricket team on the world stage. The Friendship Series marked the start of the IND vs SA rivalry and it has continued today. Let’s find out more about it.

What was The Friendship Series?

The Indian team, in 1992-93, became the first recognised non-white national side to tour South Africa, and it was no surprise that Durban, with its large diaspora and ties with the motherland, put on a huge reception and staged the first Test.

The tour – labelled the Friendship Series – was South Africa’s way of reciprocating India’s efforts in ending the country’s sporting isolation in 1991. India had been among the principal opponents of apartheid – it snapped diplomatic ties with South Africa in 1948 following the electoral victory of the National Party, which implemented the apartheid laws. But Nelson Mandela’s release from prison in 1990, the return of the African National Congress (ANC), the movement towards establishing a multi-racial democracy and emotional links with its large Indian population all boosted the possibility of restoring relations.

How did South Africa get reinstated as a full member of the ICC?

Ali Bacher, the former South Africa batsman who captained them in their previous Test series, in 1970-71, led the effort in pushing for full-member status within the ICC after becoming the managing director of the unified United Cricket Board of South Africa (UCBSA). India’s vote – with backing from its government – played a critical role in achieving it. And when a home series against Pakistan was cancelled, India called on South Africa to fill the breach. Within days Clive Rice led South Africa on a three-match tour of India to mark his country’s return to international cricket. A year later it was India’s turn to tour.

“In 1991, our reintroduction into world cricket, at the ICC level, was proposed by India,” Bacher said. “Because of this we said to them that when we have our first international tour into South Africa, it would be India, as a gesture of appreciation for their support for our return to international cricket. We offered it to them. They never said it should be part of the deal. It came from us and obviously we kept our word.”

What was the impact of the Friendship Series?

The tour served as a successful example of sporting diplomacy, given the political backdrop and the mutual desire to improve ties, and the significance of India’s visit expressed itself in the reception the cricketers received from the Indian community. Hundreds cheered on the streets of Durban during a motorcade reception, and there was little doubt over where their loyalties lay – partly as a result of emotional ties but also due to the alienation wrought by apartheid.

“When we went there we were shocked by the extent to which apartheid had wreaked havoc in society,” Ayaz Memon, a senior Indian journalist who visited South Africa in 1991 and covered the 1992-93 tour, said. “To see such segregation in real terms was quite extraordinary.”

Harsha Bhogle, who was also among the journalists on the tour, wrote this in his biography of then India captain Mohammad Azharuddin: “‘The team has come from our motherland to defeat the white man,’ they said and their voices spoke of a language of pain and hatred.”

“We were isolated for 20 years and to keep the game alive you become more innovative, and market-orientated. You think more about the game, how to survive, how to prosper, how to bring in supporters”

What off the field events were the Indian cricketers involved in?

The Indian cricketers, for their part, served as good ambassadors, meeting Mandela at the ANC headquarters, visiting the townships to promote the game, going to Pietermaritzburg – where Mahatma Gandhi’s struggle against discrimination began – and were helped by Amrit Mathur, now Chief Operating Officer of Delhi Daredevils but then a newly appointed tour manager. PR was to prove an important element in a tour that meant more than cricket.

“There were too many official functions and sometimes we felt, ‘Give us a break,’ and he [Mathur] used to handle that so well,” Sanjay Manjrekar, a member of India’s touring party, said. “He was such a good communicator and a guy who spoke on behalf of us, addressed the South African community and presented the Indian perspective. He was also young and he could easily get us to change our minds, and he was on the same wavelength. He did a brilliant job.”

What was the level of cricket during the IND vs SA Friendship Series?

The level of cricket failed to measure up to the pre-series hype. The Tests, especially, made for dull viewing, with run-rates of two or just above and steadily declining attendances.

Three of the four Tests ended in draws; only Kapil Dev’s enthralling century in a losing cause in Port Elizabeth and Allan Donald’s fiery spell to win his team that Test stood out, while Jimmy Cook’s first-ball duck in the Durban Test – his maiden Test – after waiting for 21 years since his first-class debut was a sore moment. The ODIs were better received. The end result was quite one sided as South Africa romped past India 5-2.

What were the new things introduced during the IND vs SA Friendship series?

There were two crucial aspects that had long-term implications – one for the game in general and the other particularly for South Africa: the use of technology by umpires to make decisions, and South Africa’s preparedness to host an international sporting event. Sachin Tendulkar became the first batsman to be ruled out by a third umpire.

How did the teams agree to use the system? “I remember Azhar and Ajit Wadekar [the India coach] listened very carefully and they appeared to like what I was saying, but they were very nervous,” Bacher said. “But they agreed. And it’s quite extraordinary that they never consulted their board, I never consulted my board. We pushed the button and off we went.”

The use of technology was not without incident, as Steve Bucknor, who had stated before the series that he didn’t need a third umpire, turned down a run-out appeal against Jonty Rhodes in the Johannesburg Test when he was in fact a foot out of the crease. Rhodes went on to make 91. Bucknor realised his folly upon watching the replay in his hotel room and pledged at a press conference to use the third umpire in future decisions.

Floodlights, grassbanks, well-appointed stadiums and facilities were on offer for the tour. Even back then South Africa had in place the infrastructure that would go on to make it a preferred destination not just for cricket events. “It wasn’t like India trying to put together the infrastructure for the Commonwealth Games,” Manjrekar said. “Though the country was living on its own, it had set global standards very early.”

“We were isolated for 20 years and to keep the game alive you become more innovative and market-oriented,” Bacher said. “You think more about the game, how to survive, how to prosper, how to bring in supporters. In the eighties we came up with day-night cricket for domestic matches. So when India came in 92-93, it was something we had carried on since the 80s.”

What were some of the controversies of the Friendship Series?

One might imagine that something called The Friendship Series will be a benevolent, controversy free affair. However, that wasn’t the case and things took an ugly turn in an ODI in Port Elizabeth when Kapil Dev ran out Peter Kirsten after warning him for backing up too far as he ran into bowl.

“Kirsten was taking too much of a start, taking an advantage,” Manjrekar said. “Kapil shared that with me and I said, ‘I think you should warn him’. Kapil did that twice to Kirsten, and told the umpire. When that kept happening, I told him he was well within his rights to run him out. And that’s what Kapil did, very much against his nature. It was absolutely fair and it was after he had warned him at least twice – anyone else would have run him out the second time.”

The umpire, Cyril Mitchley, then at the bowler’s end, didn’t quite share the sentiment. “After the incident, the UCB had 12 reported cases of schoolboys doing it. They saw Kapil do it, they followed it. As much as I respect Kapil, I didn’t agree with what he did,” Mitchley told the Indian Express in 2006.

Kirsten didn’t hide his displeasure, though what his team-mate Dave Callaghan said, as Bhogle quotes him in his book, best captures the mood at the time: “So this is what the f****** Friendship Series is all about.”

What followed after that “Mankaded” dismissal could potentially have landed the tour in strife. South Africa captain Kepler Wessels’ bat, later that over, made contact with Kapil’s shin and the Indians lodged a complaint claiming he had struck the bowler deliberately. “On one occasion he bowled the ball and Kapil was holding his knee, his shin, in pain and I thought he had cramps. I asked ‘Paaji, kya hua’ (What happened?),” Manjrekar said. “And he said, ‘Nahi yaar, usne balla maar diya mujhe’ (No man, he hit me with his bat). That’s when Kapil went to the umpire and told them this had happened.”

Clive Lloyd, the match referee, while fining Kirsten 50% of his match fee, didn’t take action against Wessels due to lack of visual evidence, as SABC, the broadcaster, claimed it had not recorded the incident. The Indians didn’t push the case further after that. “There was a responsibility among all of us that we should not make this an issue,” Manjrekar said. “It wasn’t something that robbed us of a wicket, or like we let go of something that would have helped us win a game. So we just got on with it.”

The entire tour might have had a lot of off field events and some of the on field incidents were also less than desirable. However, the Friendship Series was a landmark event that celebrated the wind of change blowing through South Africa and brought one of cricket’s most dominant teams back into the fray. While the cricket quality of the Friendship Series wasn’t very high, the sport of cricket and the country of South Africa as a whole, were the real winners.