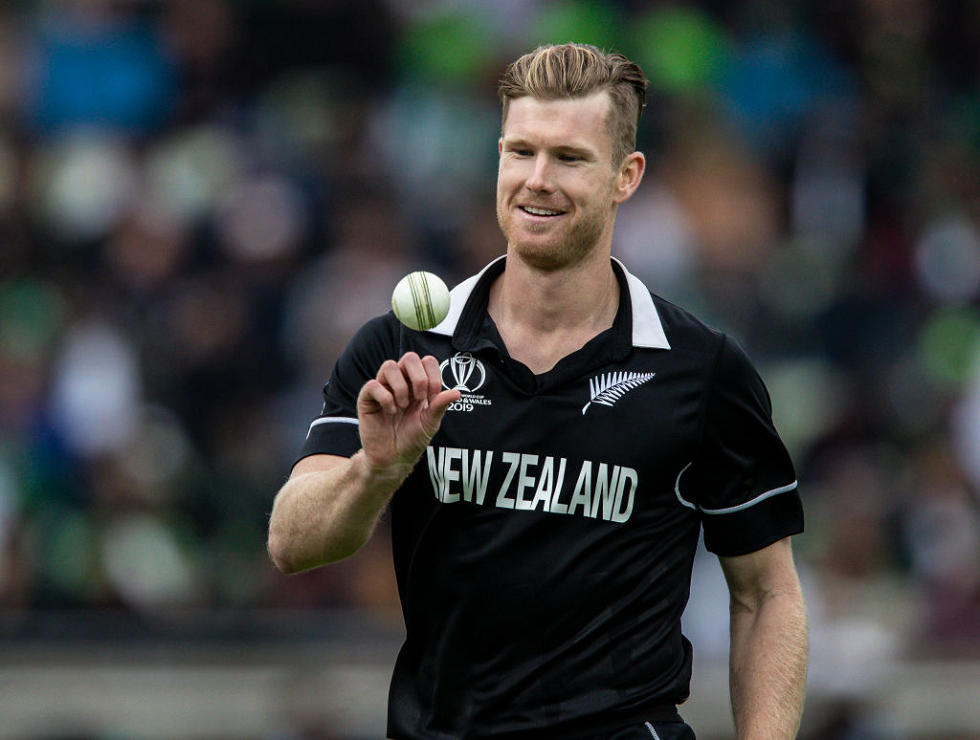 Jimmy Neesham began his cricket career in 2010 and within two years, he made his international debut for New Zealand versus South Africa in a Twenty20 International (T20I) match. Besides cricket, Neesham is also known for jolly good character.

Jimmy Neesham first came into the limelight at the Twenty20 format debut for Auckland in the HRV Cup Final in the 2009-10 season against Central Districts. Here he scored top for his side with 39 which came in just 20 balls. However, his side fell short of 78 runs.

A promising all-rounder, Jimmy Neesham scored 189 runs in the 6 matches during the 2010 U19 World Cup. Only Harry Baom, with 202 runs scored more than Neesham for New Zealand at the U19 tournament.

James Jimmy Neesham premiered his youth Test (U19 Test) debut against England in 2008. James Taylor, Alex Hales and Chris Woakes also joined him in making their respective youth Test debut in the same game for England.

Neesham made his Test debut against India in February 2014 in the second Test of the same series and made history!

Jimmy Neesham became the 8th player to score a century each in the first 2 matches of Test career becoming the only New Zealand player to achieve the feat.

He was an underperformer in ODIs:

Best ODI bowling figure on a losing cause:

In the first ODI series against Bangladesh at Mirpur, James Jimmy Neesham registered his best bowling figure of four for 42 from his spell of nine overs. Unfortunately in 2019, that ended up as a losing cause because New Zealand lost the game by 43 runs (D/L method).

This event was the second best bowling figures by a Kiwi bowler against Bangladesh in an ODI which came on a losing cause.

During the fourth ODI against India in January 2014, Neesham missed a very easy run out of Ravindra Jadeja, in the final over of India’s batting.

This was the fourth ball of the last over of the first innings, where Jadeja and MS Dhoni stole two runs where there was no run expected which was all because of Neesham’s bizarre miss, which needed him to just clip the bails.

Later on,  in an interview with Mind The Windows, the Kiwi reacted in a funny way by saying, “No, not intentionally getting Dhoni off strike for the end of the over.”

In 2014 IPL auctions, Jimmy Neesham went under the hammer for the first time in 2014, and was bought for 1 Crore INR from a base price of 30 Lakhs INR. However, he didn’t play any game in the season.

In 2015 IPL auctions, Jimmy Neesham was bought by Delhi Daredevils for 50 Lakhs INR from a base price of 30 Lakhs INR. He made his IPL debut and featured in 4 matches during the season.

He helped Grant Elliott in the 2015 World Cup:

Neesham was in the New Zealand squad for the 2015 Cricket World Cup but an injury meant his omission from the side and paved the way for another all-rounder — Grant Elliott, who was not even the 30 player probable for the team.

In March 2020 Aussie cricketer Ben Cutting’s wanted to shave off the beard; Jimmy Neesham said no:

At the start of the pandemic lockdown, Australian cricketer Ben Cutting’s better half Erin Holland shared a photo on her Instagram account with the caption saying “Bye bye beard” with her hands on Cutting’s bushy face. However, it seems, another cricketer wanted Ben to hold on to the thick fuzz on his face. Ofcourse the cheeky cricketer was New Zealand’s Jimmy Neesham who funnily commented ” ‘I’ll kiss you, if you keep it’, it being the beard.

On 16 May 2019, during the IPL game between Chennai Super Kings and Mumbai Indians, MS Dhoni was called “not out” according to the third umpire. Many players debated that the decision was wrong, and because of the camera angle, it appeared that Dhoni was inside the crease. James Jimmy Neesham twitted- “I love how passionate some fans are about our sport. I have huge respect for MS but how anyone could see the below photo and say it’s not out truly astounds me”

This attracted a lot of attention from Dhoni fans and Jimmy Neesham was forced to deal with enraged fans. He later deleted the original tweet, and he sent out another tweet explaining why he did so.

James Jimmy Neesham believes himself to be a look alike to the famous Aussie actor — Chris Hemsworth, who is famous for his role in Thor and the Avengers.

So far, Neesham has represented plenty of teams apart from New Zealand in his short career and those include Auckland, Delhi Daredevils, Derbyshire, Guyana Amazon Warriors, Kolkata Knight Riders and Otago

During one interview, Neesham revealed his retirement plans and said, “I’ve been talking to a few people in radio and journalism and that sort of thing, and there have been some promising leads. But having said that, it’s been quite difficult while still trying to rehab and get back into the cricket side of things.”