Sunrisers Hyderabad (SRH) and Royal Challengers Bangalore (RCB) have both performed similarly in the Indian Premier League (IPL) this year. Both the teams have won seven out of their 14 games and are squaring up against each other in the Eliminator on Friday, November 6 at the Sheikh Zayed Stadium in Abu Dhabi. The teams played each other once in the first round, with both emerging victorious once. RCB started the tournament well but stumbled in the second half of the tournament, losing to the Delhi Capitals in their last game. The Sunrisers are coming off strong on the back of a 10 wicket win over the Mumbai Indians. So this match is going to be a good one.

Abu Dhabi’s pitch is a batting beauty and it will be great for stroke making. It will be a good bowling pitch for the pacers as well. Dew might end up being a key factor in the second part of the match. It’s a good pitch to bat second as the temperature will be cooler (around 29 degrees Celsius) and the humidity will also drop down to the 40s.

Lineup Predictions for SRH vs RCB

Manish Pandey has been the key factor behind SRH’s performance in the tournament. He has scored 380 runs in 13 innings with a strike rate of 127.51. He played well against RCB in their previous encounter as well.

Yuzvendra Chahal is the fourth leading wicket taker of this edition of the IPL. He was also the player of the match in the first encounter against SRH, scalping three wickets in the process. He will be expected to bowl well.

SRH vs RCB: Head to Head

At neutral venues (outside India)

Where can I watch SRH vs RCB?

Live Streaming – The match can be streamed online on Disney + Hotstar VIP.

The chasing team has a much higher chance at winning.

Disclaimer: This prediction is based on our understanding, analysis, and instinct. It is by no means a guarantee of the outcome. While we recommend using our points in your analysis, the final decision has to be yours. 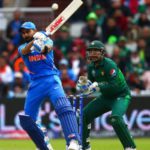